Like many horror sequels of the vintage era, Dracula's Daughter has only a tenuous connection to the original film. None of the same actors, not the same director, but it does hold the heavy atmospherics of the first film, here in a sort of glamorous hybrid of art deco and goth. The unique aura makes it unlike most sequels and so does the rather complex main character: The Countess is one of the first, if not the first, sympathetic vampire in movies -- she doesn't want to be a vampire, doesn't want to kill people, even goes to a psychiatrist to try to rid herself of blood lust. 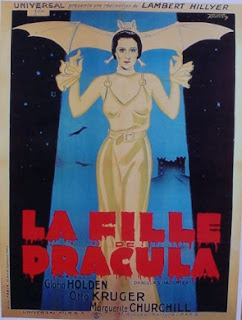 But first we have to put up with some opening dawdling about by some comic-relief British cops and Van Helsing giving a quick explanation of who Dracula is and why he's got a stake through his heart -- Van Helsing is arrested -- if Dracula wasn't a vampire, it's murder.  If Van Helsing insists he was a vampire, Van Helsing is crazy.  Dracula's Daughter isn't a long film, and it's got way too much padding courtesy of various nitwits. Finally, Dracula's daughter -- aka Countess Marya Zaleska -- herself shows up, works some Jedi mind tricks and a hypno-ring and gets hold of Dracula's body. She burns the corpse, with much chanting and exorcising and cross-waving, hoping to break the curse while her enigmatic assistant, Sandor,  looks on. 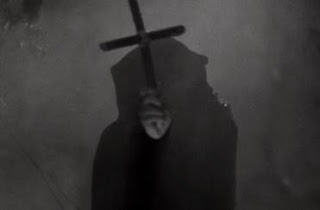 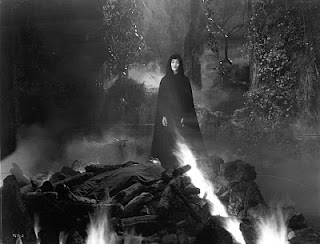 Except when he flinches from the cross, of course, although that's mostly a wannabe move. Like most vampire assistants, he's doing an internship in hopes of being made a full vampire someday. No promises and only the smallest per diem. I think that's why Renfield wound up eating bugs -- even going to the dirty water hot dog cart, there's no way you can eat lunch within 10 blocks of the Conde Nast building for less than $4 a day. The Countess insists that burning Dracula has freed her, but Sandor isn't so sure. So, while she sits  in her backless evening gown pumping away at the piano and murmuring cheery platitudes (well, cheery for her anyway), he's sitting in the corner getting all negative... 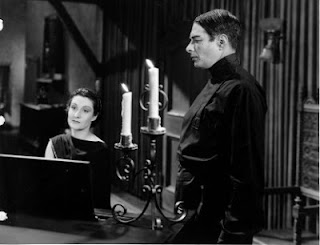 You know, Sandor is pretty defiant for a henchman. What happened to "Yes, master"? And so the Countess finally gives up, puts on her velvet cloak and her hypno-ring and goes out looking for trade... i mean victims. Although one gets the distinct sense that the Countess gets more than a cup o' hemoglobin off of those she selects for drainage. She seems to prefer blondes. But more on that later.... 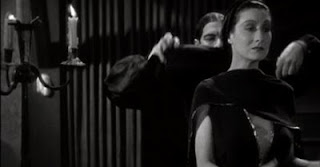 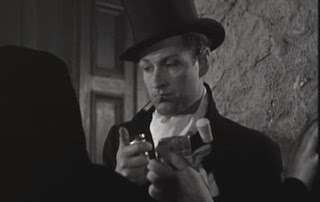 And so this playboy is found the next day, drained of blood through "two sharp punctures over the jugular vein." 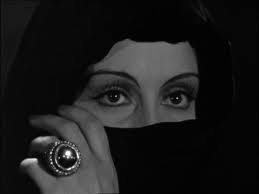 Soon after we meet another psychiatrist and a secretary, Jeffrey and Janet, whom are supposed to be our leads but who aren't quite up the the task. Jeffrey is too much uptight upper lip and Janet crosses the line from spunky and sassy to just plain fucking snotty very quickly. And keeps going. 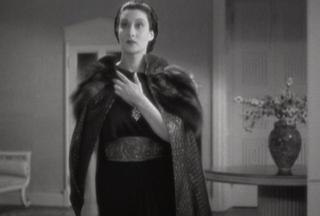 Our elegant Countess Dracula normally would not give these losers the time of day... well, time of night. But she's a good dinner guest and listens bemusedly to Jeffrey's stories about Van Helsing -- he's been engaged by the defense -- and the joshing about vampires from people with too much upper teeth and not enough chin. ("It seems this fellow Van Helsing shoved a stake through this Dracula fellow's heart.") 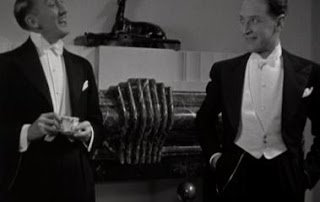 She puts up with the idiots and their bragging and sips her tea -- because you know the Countess would "never drink... wine." I feel like this at parties a lot: Sit in the most comfortable chair, half-listen to people babble about bullshit they know little-to-nothing about. Except i'm usually drinking... wine. She comments disdainfully, "Possibly there are more things in heaven and earth than are dreamed of in your... psychiatry." (The Countess is big on the pause. Her delivery is very Dietrich and, honestly, who would make a better vampire than Marlene Dietrich?) But when Jeffrey begins claiming that "sympathetic therapy can release the mind from any obsession," she begins to think that maybe there's some sort of Freudian/Jungian equivalent of a stake through the psyche that could free her from a life of blood-drinking and signs up for some appointments with the shrink. 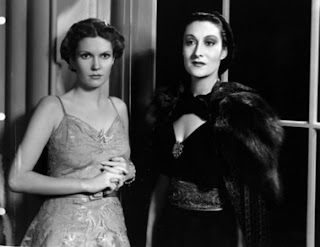 Guess which one's the bitch you want to stab? Hint: It's not the vampire.

Of course, she can only meet at night, which means she receives him in another gorgeous, glittering evening gown and annoying Janet throws tantrums makes repeated prank phone calls. Yeah... spunky and adorable. Interestingly, the Countess grasps the idea that vampirism could all be some kind of obsession, some kind of self-mindfuck. Psychiatrist Jeffrey gives her some bullshit advice, thinking she's talking about quitting smoking rather than killing people, and runs off to do something else. As the Countess wonders what to do now, Sandor appears with an ingratiating smile on his face. The Countess announces, "We are going to the studio. Tonight I... paint." 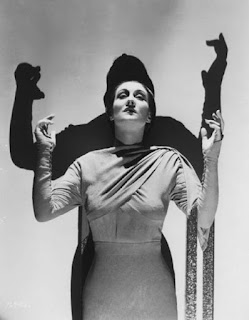 And so begins the most famous bit of Dracula's Daughter, the lesbian seduction scene. Sandor picks up a "model" on the street and brings her to the "studio." Jesus, don't we all know by now that anyone who wants you to go with them to "model" is a serial killer. He takes the world's prettiest and best-groomed homeless girl to the Countess, who gives her a sandwich and makes her move. It's about as subtle as "take your top off and have some wine" can be. 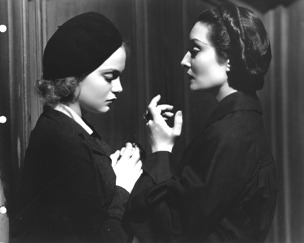 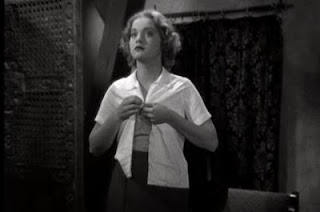 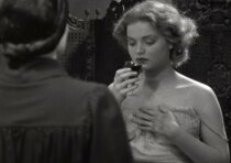 The vampire metaphor usually leans sex -- and, really, it's rather pre-code Hollywood clear in this film that there's more, ahem, activity, than merely bloodless lips pressed to punctured jugular. But in Dracula's Daughter, it feels more like our symbolism is more narcotic-oriented. The Countess tries to feel happy, Sandor reminds her everything is shit, she gets high. The Countess seeks help, it does not happen immediately, she gets high. 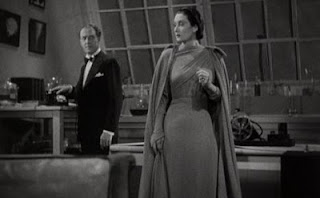 Her victim winds up in the hospital with "anemia and amnesia" under the care of Dr. Jeffrey -- wotta coincidence! The Countess simultaneously arrives at his office in yet another sensational ensemble, begging him to "go to the Continent" with her to somehow cure her vampirism. "The Continent." How fucking classy is that? She's like some supervillain cross between Gloria Swanson and Jackie O. that galavants around Europe, wearing couture and drinking the blood of attractive bisexual blondes. 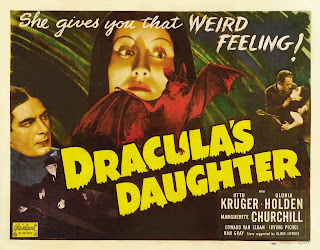 And so, like every Dracula film, they eventually do wind up chasing off to a creepy castle somewhere in Trannsylvania. Gloria Holden does a fine job as the icy, tormented vampire -- repentant, but not pathetic, an exotic woman of the world rather than an underfed ingenue. But, like many films (the recent Conan flick comes to mind) it takes an appealing, interesting lead and constantly shoves them offscreen to feature tedious supporting characters. And, of course, like virtually everything else in the world, the potential and promise of Dracula's Daughter has trickled into bullshit mediocrity. You know what Dracula's daughter is in 2013? A Monster High Doll targeted at eight-year-old girls and a cartoon character voiced by Disney princess Selena Gomez. Curious how one needs to go backwards almost eighty years to Dracula's Daughter to get a mature, complex vampire heroine....

Shawscope!
The Shaw Brothers were the lords of Hong Kong action cinema. Dig the homicidal hardware and krautrock groove of Master of the Flying Guillotine or the Shaws' collaboration with Britain's Hammer house of horror, The Legend of the 7 Golden Vampires.

Women in Warpaint
Truly, the 80s were eyeshadow's greatest decade. In Ladies & Gentlemen: The Fabulous Stains, Diane Lane goes from reality TV star to punk rock star in a prescient flick that also stars members of the Clash and the Sex Pistols. In Liquid Sky, the gender-bending and utterly bored Anne Carlisle plays killer queen to the jaded East Village art scene.


Modern Grindhouse
A pair of flicks from the aughts that feel more like the days of the drive-in. In Drive Angry, the one and only Nicholas Cage kicks ass and crashes muscle cars in a race to save his grandbaby from Satan. In Shoot 'Em Up, Clive Fucking Owen deploys heavy artillery and dry wit to battle the mob.

Children's Shows Gone Wrong
Saturday morning was always creepy and now we know why. Shakes the Clown chronicles the black-humored adventures of an alcoholic clown. Death to Smoochy reveals the corrupt world of dopers and thieves inside those adorable furry costumes.

A Girl in Trouble
Two young divas take on the big city and lose, but are glamorous as hell while doing it. In Butterfield 8, we learn how you can look like Liz Taylor and live like Charles Bukowski. In Ciao! Manhattan, underground superstar Edie Sedgwick rises in New York's art scene, then bottoms out in Los Angeles.

You Call This a Scientific Method?
When ten-year-old boys and madmen do science experiments, they should keep it to themselves. In Village of the Giants, little Ron Howard invents a growth serum that winds up in the hands of a bunch of local juvenile delinquents. The Brain That Wouldn't Die is what happens when a nutjob pseudo-Dr. Frankenstein accidentally decapitates his fiancee.

Goth Moderne
Universal Horror was the apotheosis of art deco as a goth aesthetic. The Black Cat matches Boris Karloff and Bela Lugosi in a tale of hypnotism, Satanism, paranoia and revenge. Dracula's Daughter is ostensibly a sequel to the Lugosi classic, but this elegant, bisexual female vampire seems more like a prequel to Catherine Deneuve in The Hunger.

Vintage NYC Sleaze
Explore the city at night from Soho nightclubs to Time Square dirty bookstores in Who Killed Teddy Bear? starring a creepy Sal Mineo working at Elaine Stritch's club. Continue the walk on the wild side with Satan in High Heels, in which a leather-clad lovely goes from carny stripper to cabaret crooner, breaking hearts and busting balls along the way.

Antiheroines
These movies make Joan Crawford look like Meredith Baxter Birney. Beyond the Forest features Bette Davis in a performance that's so over-the-top it veers into self-parody but also so utterly nihilistic it's stone cold punk. John Waters' Female Trouble turns the genre on its head, with that great interpreter of the feminine condition Divine going from teen mom to criminal icon.

Blaxploitation Surrealism
What happens when a ladies' motorcycle gang that dresses like Funkadelic tries to save Watts from a racist fried-chicken mogul? The wonderfully off-kilter Darktown Strutters, that's what. In Disco Godfather, Rudy Ray Moore fights "the wack," while never missing a roller boogie contest at his nightclub. I can dig it!

Violent, Weird & Totally Girly!
Two utterly bananas films explore the rage that lurks beneath fluffy pink femininity. Hausu mixes animation and live action in a dizzying tale of teenage fantasies gone bizarrely awry. Perfect Blue is a twisted anime that owes more to Hitchcock and Lynch than to Sailor Moon. It looks at fame, identity and, again, the blurring of reality and fantasy.

70s Musical Madness
Back when nightclubs were big, clothes were loud and Quaaludes were freely available. Phantom of the Paradise is a bit Faustian fable, a bit music-biz tell-all, over-the-top either way. Thank God It's Friday stars Donna Summer, the Commodores and a Casablanca/Motown soundtrack to tell the tale of one wild night at the disco.

Space Opera
We have seen the future and it is campy as fuck. Begin with the operatic Queen soundtrack, over-the-top set design and so-hammy-it's-bacon acting of Flash Gordon. Continue the chortling with Queen of Outer Space -- a piece of fifties foolishness whose set is encrusted with glitter and whose script is made of wood. But, hey, it's got Zsa Zsa Gabor!

All the Damn Movies!

... you may not want to admit it, but you had a really good time.